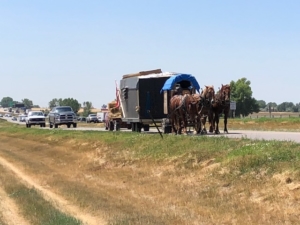 In a rare meeting of minds and agendas, an ad-hoc group of GOP bigwigs, civic groups and environmental radicals got together and devised an unorthodox plan to deal with traffic on Interstate 25, the biggest North-South highway linking Northern and Southern Colorado. Republican dissident Warren “Spud” Douglas, “We all know when something just ain’t workin’, the best we do is quit it. That’s what the Colorado GOP plan is for I-25. And we all know I-25 just doesn’t work. If you have any doubt, just drive on it on Labor Day weekend or Thanksgiving. Our plan is simple: close the Interstate and de-fund it. That way, the taxpayer won’t have to foot the bill for this unconstitutional monster that the Eisenhower administration built, and let the private sector prevail! We believe that individual people are resourceful enough to find their own means of moving themselves and their cargo from North to South without the help of government. If we’re gonna be true Constitutionalist, small-government Republicans, that’s what we do: reduce the size and scope of government. Where in the Constitution is it written that the government’s supposed to build highways?”

Environmentalist Fern Greene added to the chorus, “If Left-leaning Coloradoans are ever to consider themselves environmentalists, [you need to] put your money where your mouths are! Have you heard of re-wilding people’s hearts and minds through better environmental education in our public schools? Bah! That’s for slacktivists! We’re gonna re-wild Colorado practically. You may ask, ‘So what are you doing about it?’ Well, my answer is simple: We’re creating a coalition to discourage the use of the cancer that cars are to our atmosphere by destroying the means to use them locally: I-25. In its place, my group proposes to turn what is now the interstate into a wilderness sanctuary and a migratory corridor for wildlife.”

Joining forces with environmentalists and right-wing Republicans, was Coloradoans for Safety Above All Else (COFSALE). Spokeswoman Stephanie Ramsey gave her reasoning, “Do you know how many people are injured and killed each year on Colorado roads? What better way to reduce the number than shutting down the worst culprit of them all? Duh…”

We, at the Focopolitan Tribune drive on I-25 and find it to be a cluster-fuck that only the lower rungs of Dante’s Hell could spawn. We can’t see why Coloradans haven’t gotten rid of it sooner. It is clear to us therefore, that there is no downside to this plan: lower taxes, fewer deaths and injuries on our roads and a restored environment… sounds like a classic no-brainer to us. We also praise the parties of this proposal for their truly democratic grass-roots activism and their meeting across party lines and political agendas.