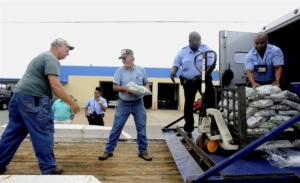 Focopolitans were surprised last week to find out that our beloved local institution, New Belgium Brewing has been sold to the Japanese beverage mega-conglomerate Kirin Holdings.  Mourners were seen in Old Town wearing black sheaths and carrying a large mock coffin symbolically marking the end of an era of exceptional beer drinking and capitalist leadership in our beloved Fort Collins.

While Focopolitans mourn and wonder about the future of Tour de Fat, and whether or not we have forgotten Pearl Harbor, New Belgium’s biggest stakeholder, and co-founder, Kim Jordan, has received her payment of the cash deal.  A Brinks armored car arrived at Ms. Jordan’s residence together with a beefed-up contingent of armed security men this morning with its hold full of greenbacks, and knocked on the front door of Ms. Jordan’s home.  As luck would have it, your reporter was there to see it all go down…

This development came as a surprise to Ms. Jordan who appeared somewhat flabbergasted.  She had this to say, “Wha-?  It was a cash deal, but I wasn’t expecting this!  I’ve never seen so much dough in my life!  How in the hell am I supposed to get all this green shit??  I’m gonna need a forklift, and those are all back at the brewery.  A– and where am I gonna put it all?  It’s not like I can put nine figures and change of moolah in my pocket!  What the…”

Brinks driver Al Moore, the guy in charge of the delivery, had little to say about the whole deal, “I dunno.  I ferry cash around all the time.  Sometimes in bags, sometimes on pallets, like today.  It’s usually to banks, and this is a residence, so that’s a first.  Other than that, I’m just doing my job.  Ms. Jordan, can you sign for this, please?”