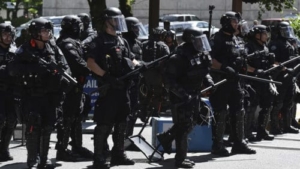 This last weekend, Boulder residents joined other outraged Americans in taking to the streets to protest the killing of yet another unarmed African-American- this time at the hands of Minneapolis Police officers.  Taking banners, signs and the righteous rage in their hearts, these virtue-signaling citizens of the Boulder People’s Republic converged on the Boulder Police Department’s building at 33rd and Arapahoe.  They took the bus, carpooled as best they could, parked their hybrids and bicycles wherever they could, and some even walked because the environment can’t be ignored, even during pandemics and times of racial tension. Protestors even donned masks and showed respect for social distancing requirements.

The composition of the crowd could best be described as consisting of only a few people of color, with trustafairans slightly over-represented.  As cries of “Black Lives Matter!” “Hands up don’t shoot!” and something like, “This is what hypocrisy looks like!” got a little out of hand, a mass text hit the people of Boulder, including the protesters.  “Grand sale of organics at Alfalfa’s!  Limited time!”  Apparently, that was all it took for the protest to run out of puff.

Reporter Ludwig Schnee caught up with a blonde, dread-locked 20-something hippy chick who declined to share her name, “Yeah, black lives matter, but 50% off of organic, fair trade, locally fermented Argentine kombucha?  I think I’m going to Alfalfa’s.  It’s only like a mile away.”  Karen Kretschmer, 59, of Eldorado Springs, also granted us a word, “I support the Black Lives Matter movement, but I also support local business, and the vegetarian bulger and bean porridge [at Alfalfa’s] is to die for!  And the wheatgrass lemonade too.  Oh, and my iPhone tells me that they got a discount on patchouli that only lasts ’till 6PM.  I gotta go.”

As everyone left, recycling their signs, they left behind one man, Letravious Martin. “Where the fuck did everybody go? I mean this is important!”

Over the past three weeks, Eastern Colorado and Western Nebraska have been
Go to Top