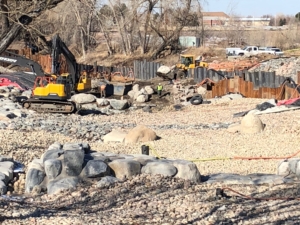 After finding gold along the Poudre River, Trump Mining Corporation, a precious metals extraction company owned by none other than The Don himself addressed community members in Fort Collins, Greeley and all other municipalities that line our precious riverine resource.  In a Tweet, our president declared to the Poudre River community, “This is going to be the BEST gold mine EVER!!!  Fort Collins, Greeley, Laporte, Bellevue and all those places there are gonna be proud of this.”

These surprising developments however, have been met with fierce criticism.  FoCo environmental activist Fern Greene reached out to the Focopolitan Tribune and gave us a full interview.  “Gold mines are about the dirtiest, filthiest most environmentally degrading operations possible!  I’m so outraged that this fucking thing is even gonna open!  Do you know how much cyanide and mercury is used in the mining of gold?  Where’s it all gonna go?  And what is this all for?  To get some rich-ass people more fucking jewelry than they already have?  I’m sorry, but as a member of this community, I say, ‘no.’  Pollution of rivers and soil is the kind of thing that should only happen in countries where black and brown people live, not here!”

We at the Tribune managed to contact a spokesman from Trump Mining.  Aurelio Goldberg assured us, “Yeah, we do use mercury and cyanide in mining gold, but at least we have the river to take it away.  No problem there.  We just dump the stuff in the Poudre and away it goes…”  Horrified at such a flippant disregard for the environment, your reporter Ludwig Schnee asked about how this might effect the wildlife of the ecosystem to which Mr. Goldberg replied, “It’s gonna kill some fish, but so much the better.  All those anglers I see in the summer aren’t gonna need to pay a cent for those expensive waders, rods, bait or line.  They just need to go down and pluck ’em out; we did the hard part for them.”