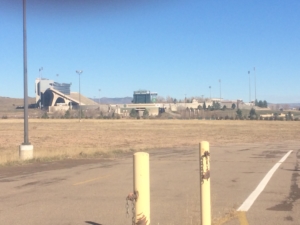 In an imperial-like gesture of bigness, representatives from the The Ponds community proposed an unorthodox solution for the lingering questions about what to do with Hughes Stadium.  After numerous discussions that addressed such issues as open spaces and affordable housing, it appears that a number of residents of The Ponds have come to a consensus that the area near their upscale neighborhood ought to become a landfill.  The group, calling itself YIMBY, for Yes, In My Back Yard, reached out to the Focopolitan Tribune in order to voice their ideas.

In a prolonged phone conversation with reporter Ludwig Schnee, spokeswoman Deb van Diemen of YIMBY stated, “It has come to the public’s attention that the Larimer County Landfill is going to max out any day now.  It is clear to everyone in Fort Collins: something needs to be done about this!  For us to accommodate all the trash that a growing middle-class population produces, we can only do so with sacrifice.  Yes, I said it- SACRIFICE!  We agree to sacrifice the nice views that we have for a new landfill for us to throw ‘away’ all the Chinese-made plastic trash that we and our lower-income neighbors buy, keep for six months, and then pitch.  Let’s face it: we live in Consumerville, USA, and we’re not better here in FoCo just ‘cause some of us say that we shop ‘local.’  We produce no less trash than people in Littleton, Junction or the Springs.”

Surprised at this statement from a person who obviously lives in an upscale neighborhood, our reporter asked about the effect on property values.  Ms. van Diemen replied, “ As we at YIMBY see it, it’s a win-win situation.  The city and county get a new landfill, the fees from our trash-haulers go down, and although our property values might go down some, that’s okay, they won’t plummet… and don’t forget, if your property value goes down, so do your taxes.  There is no downside to this.”

Wanting to find out more, our intrepid reporter went to the area and inquired a little more about the matter.  Residents were surprisingly candid and unanimous about the matter.  Resident Todd Reynolds remarked, “This is gonna be great!  Our lower-income neighbors will be able to walk their way to the local dump every afternoon and recycle just like us.”  He added, “I’ll bet they’ll be waiting for every dump truck that arrives just to see what our side of Overland Trail threw away- recycling at its most basic.”

It is unclear how city, county and state laws will affect this proposal.  The Larimer County Board of Commissioners and Fort Collins City Council have not officially replied to Focopolitan Tribune calls, but a local official, speaking to this newspaper on background had the following to say, “We are excited to see such civic pride expressed in a rather, unusual way. This will take some time to review and even then we need to look at existing state, municipal and federal laws to make sure it would be feasible.  I know that they [YIMBY] are excited, but we don’t want them to jump the gun, so to speak.  I’m just glad I don’t fucking live there!”