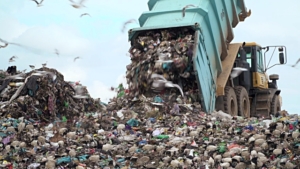 American presidents are widely honored.  They have all manner of things named after them- from bridges and highways to whole cities and even a state.  They are also honored with the biggest, most important warships in the US Navy- aircraft carriers.  But earlier last week, the city of Boulder went a step further.

In a grand show of respect and admiration, the Boulder City Council voted unanimously to name the new city landfill after Donald John Trump.  Boulder Mayor Suzanne Jones in a speech celebrating the passage of the bill honoring Trump with the landfill had the following to say, “For 40 years, I’ve served as Executive Director of [the recycling non-profit] Eco Cycle, and I’ve dealt with all manner of trash: compostable organic matter, recyclable metals, plastics and such, but in all my career of trying to salvage human waste, I’ve never seen such an irredeemable pile of useless, pointless refuse quite like our president.  Therefore, it behooves us Boulderites to honor him by naming our trash pile the Donald John Trump Boulder City Landfill.  Because we all know that, when it comes to trash, nobody beats Donald Trump; he turned multiple business ventures into trash, he had a reality TV show that was pure trash, and now he is turning our constitution and our very country into trash.  This president needs to be honored!”

The measure has been widely applauded in Boulder city and county.  The municipalities of Niwot, Lafayette and Longmont all passed symbolic laws in support of Boulder city’s honoring of The Don.  Lafayette resident Heidi Papadopoulous had the following comment, “With a name like that, I’d even volunteer my 40 acre horse ranch for the site!”

Focopolitan Tribune Reporter Ludwig Schnee actually contacted President Trump at his Mara Lago resort in Florida on the first try over the phone.  In a brief conversation, the president told Mr. Schnee, “I’m honored.  I guarantee you that this landfill is gonna be the best, the most beautiful landfill ever made!  Ever!  Just tell that mayor in Boulder to send the royalty check for the use of my name in the mail to 1600 Pennsylvania Ave. in Washington, DC!”