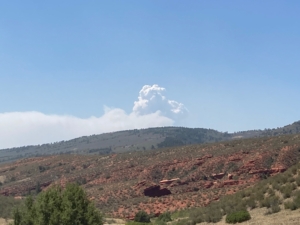 Colorado has had a very hard time lately.  We have seen a plandemic, police slayings of black men in custody, race riots, calls to de-fund the police and (surprise, surprise) a growing wave of run-of-the-mill crime.  As a result of the pandemic, we are also seeing a full one-third drop in our GDP, and a resulting start of an asset bubble that can only go CABOOM some time in the not-too-distant future.  As if all that weren’t enough, we’re also having a presidential campaign that would make Jerry Springer look like William F. Buckley.  Let me ask the readers of this august newspaper the following question: what would be the cherry on top of this warm, nasty, diarreah-shit sundae?

Enter fire season!  Like your asshole uncle at Thanksgiving Dinner showing up shit-faced drunk with his attitude, fire season has arrived to fuck with our lives when we least need it.  For five months and counting, Coloradans have not had any good reason to leave home, and now there is even less.  If being unemployed, broke, disappointed at our own communities and country were not enough for us not to get out and about, we now risk choking on soot and smoke!

All this shit has made us at the Trib think: we’ve got the cherry on top of this turd sundae.  All we need now is another mass shooting, and it’ll be complete with sprinkles on top.