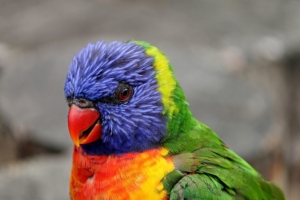 There are many local traditions here in Fort Collins that are beloved by residents, and visitors, alike. During this season the Old Town Christmas lights are one such happening. While the Lighting Ceremony went off grandly, this year officials are being plagued by a new nuisance that seems intent on making sure that the lights stay off.

“It’s a stupid parrot,” grumbled one official to FoCo Tribune reporter, Buck Hummingbird, as the two stood at the intersection of College and Mountain. “We’re used to having replace lights and possibly reposition strands because of wind and such but this fucking bird…”

The brightly-colored avian menace has taken it upon himself to single-handedly try and destroy the Old Town lights.

“I don’t know if he’s pissed off about the lights at night or we put a strand too close to his nest but he is one determined little piece of….THERE HE IS!” The official took off running.

Apparently, the Lighting Committee has had a hard time trying to catch the flying destroyer even with near-constant surveillance and the position of strategically placed bird traps.

So, what is the parrot doing?

“He’s a smart one. He knows how to twist individual lights off; he just pops’em off and flies off with the light to who knows where. He’ll finish off a set of flights in minutes like this! He’s also repositioning strands; figures he’ll probably kill himself if he bites through them so he just kicks’em away. And don’t even get me started on how encrusted he makes light strands with his poop.” The actions leave dark spots in an otherwise perfect tableau of light, while also costing the city money to replace the missing bulbs.

“We even had an incident where a biker got twisted up in a strand he had managed to move.” This was the event that precipitated the Committee’s action to rid Old Town of the parrot.

He has become a delight for tourists who seemed concerned that the cold weather may harm the fellow. Your intrepid reporter stood by a group who tried to get selfies while he sat preening himself on a cool, sunny weekend afternoon.

“Isn’t he adorable?” gushed one woman from Pennsylvania. “You don’t see many free-flying birds like that in Colorado I bet. Will he be okay when it snows? I mean he’s not from around here obviously so where does he go when it gets cold?”

Committee officials have teamed up with biology experts from CSU and animal rights activists, as well as local volunteers, to try and catch the bird.

Julie Harmful, one of the activists, had this to say, “We’re concerned that he’ll hurt himself but also that someone may hurt him as well. We want to be able to get him away to a warmer place where he can be taken care of as we near colder temperatures. Everyone is concerned about him and rightfully so.”

Missing bird posters have also been placed in vet offices and pet stores throughout the city in the hopes that he is actually someone’s pet that accidentally escaped. Julie teared up, “He’s probably missing his carer.”

Officials would just be happy to be rid of what is becoming an expensive menace.

“I mean seriously,” replied the official as he returned from trying to catch the parrot, “what the hell did we do to him that he goes after the lights?”

The parrot did not return your reporter’s inquiries.