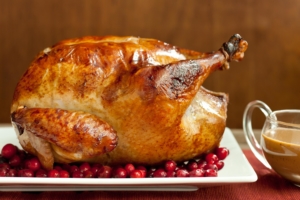 This Thursday, November 22nd, we at the Focopolitan Tribune noticed an utterly bizarre cult-like ritual.  A multi-generational agglomeration of an area kin-group assembled between four walls, exchanged greetings and pleasantries and roasted a dead bird.  After roasting said bird, the human kin-group held hands.  Soon after, an elder spoke utterances to a sky-daddy, requesting divine benediction upon the dead avian.  The elder subsequently cut into the bird, probably of the species meleagris gallopavo.  After the ritual incision of the bird’s fleshy breast, the kin group started literally to devour the beast together with sour-tasting, but edible small fruits.

What followed was a welter of feasting, with people gorging themselves on avian meat, the small sour fruits, heavy sauce and mashed potatoes.  After picking the bird literally to the bone much like vultures on a wildebeest carcass on a vintage Wild Discovery episode, the kin group devoured a reduction of a sugary orange-colored gourd baked over a thin layer of buttered flour.  After the bizarre communal feasting, some members of the kin-group swore non-binding weight-loss oaths.

Concluding the parade of oddity, the assembled went on to refer to the following day as “Black Friday” and began discussing plans that reeked nefariously of a corporate capitalist takeover OF THE ENTIRE COUNTRY!! 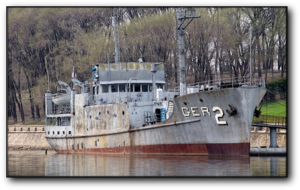 In a spontaneous gesture of conciliation, the government of North Korea surprised the residents of Pueblo, Colorado by returning the spy ship the USS Pueblo to its namesake. The North Korean Navy captured the American spy ship when she was on a routine signal intelligence patrol in the Sea of Japan during the first weeks of 1968. She has since been in North Korean hands…until yesterday, that is.

It is evident that residents of the southern Colorado town were not expecting this gift. Pueblo resident Roy Echevarria granted an interview commenting, “Okay, so last night we all went to sleep, and next morning, BOOM here we have an old-ass navy ship with a bright, pink bow wrapped around it, messing up the view of our riverwalk! How in the hell did this get here? We’ve heard of North Koreans going out and kidnapping people and shit, but this? I guess the drunks at the alehouse will have something to talk about now. As for me, I can’t wait to get rid of this rust bucket.” This is certainly going to be the prime issue of Pueblo’s first every mayor-elect, with some residents even suggesting that the ship should be a place for the election run-off as a polling station.

In the Pueblo, a sticky note and a can of North-Korean style fermented cabbage labeled, Kim’s Kimchi, was found. The sticky note read,”Dear United States, here’s your ship back. We’re done playing with it but we’ll keep the vacuum tubes–fine technology you capitalist, imperialist exploiters of the masses come up with. Please enjoy some of our private-label kimchi. We’ll see if it sells well at Trader Joe’s–it’s probiotic.”

In other news pertaining to the US Navy, the 47,000-ton battleship USS Iowa will leave the port of Los Angeles for its permanent new home in Des Moines where she will undergo gender retrofitting, after which she will be referred with the pronoun xe. 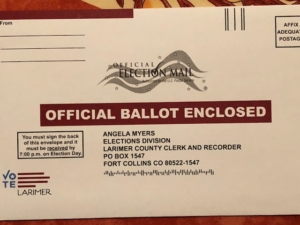 In an effort to make sense of the umpteen ballot measures, state-wide, county and local Amendments and propositions, Focopolitan Tribune reporter Ludwig Schnee managed nothing but to mash his brain, much like eating at certain restaurants did his intestines.  We at the Trib did our honest best to make heads and tails of this confusing shit, so we read each of them, subordinating clauses, fine print and all.  But seriously, this stuff just bored the shit out of your reporter.

So we took a trip to a local drinking establishment (as if alcohol ever clarified anything!), where a state representative and other local elected officials would be handy to explain this crap.  Unfortunately for our readers, said town hall meeting turned out to be as inspiring as a circle-jerk for guys who can’t get a boner- and no Cialis around.

While other publications make recommendations and endorsements of people and measures, we cannot in good conscience recommend anything unless we first understand it.  Do the drafters of these ballot measures write only to confuse us?  Where is this obfuscatory English used?  Democracy is just dandy when we talk about it, but when it comes to the nitty-gritty of actually practicing it as fully cognizant and involved citizens, it’s nothing but tedium.

We would venture to comment that you’re better entertained watching extended Latin Mass on pay-per-view live from the Vatican than trying to make sense out of these ballots that were written by lawyers for lawyers!