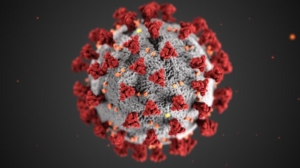 The 1st Annual Pandemic Award, a joint effort put together by the World Health Organization (WHO) and the United States Centers for Disease Control and Prevention (CDC), overwhelmingly voted for the new coronavirus as its inaugural winner.

Fort Collins was honored as the first town in the United States to hold such an event. Mainly because, “Well, they [the CDC] does research here in town for, like, diseases,” replied the janitor of the facility Dale Humperdinck. He was the only person on the premises when you’re intrepid reporter showed up before the big event. “Only place outside of Georgia!”

That night, the virus wearing a risqué dress and N95 mask to match, gratefully accepted the Double Helix statuette to a nearly empty house. Those in attendance were sitting at least 6 feet apart dressed in Hazmat suits, following accepted WHO and CDC guidelines for infectious diseases.

“This means so much to me,” gushed the virus. “I mean I’m so new and to be given this award….just shows you what hard work can do!”

As the virus continued, it had to continually use the hem of its dress to wipe away tears of joy. “I would’ve thought Ebola or another viral hemorrhagic fever would be first. Hell, even bubonic plague probably would’ve topped the list. But little, ole me? You guys are great! To be so new and so honored in this fashion. Thank you, thank you!”

Outside the venue anti-anti-activists were waiting to congratulate the recipient.

“I mean, Mother Nature is just healing itself right now. It’s amazing!” gushed one young man in dreadlocks and a tie-dyed shirt. “It was able to do what we have spent years protesting about. Oh, gotta go join the drum circle.”

And with that your intrepid reporter watched as anti-anti-activists joined for a rousing chorus of Kumbaya within a drum circle instituted by a group that, individually, drove up from Boulder.

Yesterday, at a press conference, spokesman for the city of Cheyenne Jamal
The Coronavirus Pandemic has caused much disruption in Northern Colorado as everywhere.
It was an utter surprise to all attendees of the Fort Collins
In a prepared speech at a press conference outside of a Las
This Thursday, November 22nd, we at the Focopolitan Tribune noticed an utterly bizarre cult-like
Go to Top