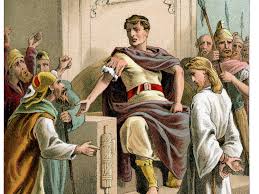 Fall has hit the Northern Colorado front range; nights are colder, leaves are changing and the time for ghouls and ghosts is just around the corner. This year the Fort Collins’ Department of Motor Vehicle (DMV) found itself hosting someone extra.

“Dude, he just appeared. Like: what the fuck?!?!” exclaimed one frightened, yet concerned young man, whilst waiting to renew his license. “Can’t you see to take a fucking number? I’ve been waiting for, like, hours!”

“He did just appear,” exclaimed DMV spokesperson Claudia Peterson. “He hasn’t harmed anyone or any property and just seems to float around. He does speak to people and that can be a bit disconcerting. However, we tolerate diversity in this building and as such we suggest that people ask nicely for him to move along if they don’t wish to interact. I know he has caused some controversy” she pointed to the few men and women outside with placards, “but I am in favor of showing the community how tolerant we are for ghosts who would like to exercise their right to assembly, as those people are doing as well.”

A resident psychic summoned the spirit, and amazingly, the ghost in question sat down with your somewhat frightened reporter for a few questions.  His identity shocked us as much as did his existence.  “Yes, indeed, I am Pontius Pilate. I heard about the DMV from a few other ghosts and wanted to check it out; I mean, this is great! Look at how deep the bureaucracy goes in this place.  Bureaucrats here are inventive!  You actually make people who want to pay you money, wait.  And what do they wait for?  To get a little paper that gives you permission to drive from one place to another!?!?  Caesar himself would not have come up with a racket like that!  There are things implemented here that I would have loved to have done. I mean, can you imagine what I could have done with that box thingy that allows you to see anything in the world?”

Mr. Pilate seemed equally curious about a map taped to the wall and the vehicles continuously pulling up and parking. “Do you know how many Judeans I could have just run down with that thing?” he pointed to an Escalade. “Woulda made my job easier.”

When asked why he decided on Fort Collins and the DMV he had this to say, “I wanted to give support to my fellow bureaucrats. Sometimes we get a bad rap, but I just wanted to show them that you can be a mid-level, papyrus-pushing, nobody bureaucrat and end up famous. Hell, I’m in a prayer that is said every day by a billion people that worship the guy I condemned to the worst possible death devised by Rome. I wasn’t even trying to hit that level of stardom! Just doing my job.  I ought to be an inspiration to these folks!”

After repeated cancellations, delays and enough insipid excuses to make the board
For yet another Holiday shopping season, FoCo’s oldest mall has paradoxically provided
Focopolitans were surprised last week to find out that our beloved local
In a prepared speech at a press conference outside of a Las
In an announcement today, the City of Fort Collins Party Authority (CFCPA)
Go to Top