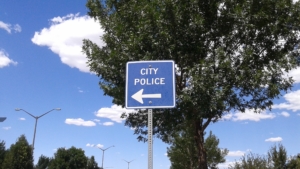 This weekend saw LOTS of stuff happening in town.  As always, Focopolitans and outsiders joined in on our unique brand of nihilistic, senseless fun known as Tour de Fat.  To those readers unversed in Focopolitan traditions, the Tour de Fat is a parade where thousands of strangely-costumed bicyclists ride their equally-oddly outfitted bikes a whole of maybe three miles from Downtown Fort Collins all the way to New Belgium Brewery in order to celebrate Labor Day.

Yeah I know, it makes about as much sense as Easter, when we celebrate Jesus’ rising from the dead after three days by eating chocolate eggs and hiding real ones, but that’s another story.  The kicker is that there are always thousands people around and there is always alcohol.  Yet for the umpteenth year in a row, with mobs of people, and beer aplenty, we have not yet seen major violent events and therefore no action for our city police force.

Focopolitan Tribune reporter Ludwig Schnee contacted public affairs officer Mohammad Hernandez at Fort Collins Police Services who ad libbed, “Yeah, dude… we’re like… totally disappointed at this.  First off, we had a rout of the CSU football team [in the game against CU] on Saturday.  Back in the day, there’d be rioting.  But even with a brand new stadium and tens of thousands of students back for some action what do we get?  A big nothing burger without fries.  Then there was that whole Tour de Fat thing, where we were HOPING for something to happen, but people just went on their merry way, and we didn’t get anything more than a few DUIs and disorderly conduct.  It’s not like [the year AD 19] 97 when we had couch-burnings every other weekend just ’cause CSU started and the football team got spanked.  That was the shit, back then.  Nowadays, I wouldn’t be surprised if there were cobwebs on our riot gear.”  When asked what FCPS hoped for next year, officer Hernandez simply replied, “I’m just disappointed in the community.  We just need…well…more crime.  With a community as peaceful as this, we’ll be out of a job sooner than later.”

After repeated cancellations, delays and enough insipid excuses to make the board
For yet another Holiday shopping season, FoCo’s oldest mall has paradoxically provided
Focopolitans were surprised last week to find out that our beloved local
Fall has hit the Northern Colorado front range; nights are colder, leaves
In a prepared speech at a press conference outside of a Las
Go to Top