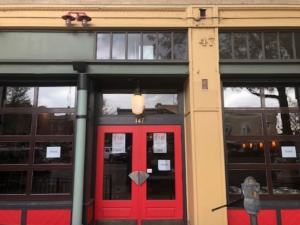 As Old Town Fort Collins bids farewell to yet another staple business, another one is already lined up to take its place. Old Chicago has shuttered its Old Town location but unlike with Bisetti’s (which rumor has it will become a biker gang clubhouse), this area has already been rented out.  A life-size bronze statue of America’s 45th president gave Focopolitan Tribune reporter Buck Hummingbird a clue as to what the space will now be.

Billy Floogul has taken over the lease. A retired  part-time outhouse digger and maintenance man who just sold his family’s business because, “damn kids don’t know what hard work is anymore!” is opening a different type of establishment. Larimer County’s sole Trump supporter is opening a museum and gift shop dedicated to his hero – Donald Trump.

“I needed to do something; I ain’t dead yet! I see all these museums to Mexicans and women and crazy artists who can’t draw worth shit and I thought, man, none can compare to this guy who went from businessman to president!”

Having plenty of savings and time, Mr. Floogul followed Mr. Trump on his entire presidential campaign collecting memorabilia, videoes, interviews, and other such collectibles. “I was also a big fan of The Apprentice and so that’ll be in there too.”

Starting from his childhood Mr. Floogul’s museum documents Mr. Trump’s life all the way to his current occupation as president. Many of the displays feature one-of-a-kind artifacts that Mr. Floogul personally collected and kept, “Just in case, you know; some people collect cows, others pigs, others books. I collected anything that I could about Donald Trump from books to hats to sayings- including what he said about [44th president, Barack Hussein] Obama’s birth certificate, which I believe to be true- to a signed piece of toilet paper because I didn’t have nothin’ else on me when I ran into him.”

And as with all museums, there is a gift shop that will be open to the public and not solely to museum goers. A wide-range of eclectic items await to be bought – facsimiles of some of the displayed artifacts to serious tomes on Mr. Trump to books that “the Donald” wrote himself. “I even have gifts for the kiddos – bobble head dolls and such.”