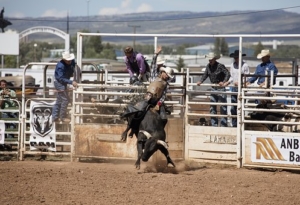 In a press release the organizers of the annual rodeo tournament known as the Greeley Stampede announced that they will be moving the event to the up-market community of Boulder, some 40 miles to the West.  Spokeswoman Stormy Ryder of the Stampede granted an interview to Trib reporter Ludwig Schnee.  “The problem with Greeley is that it stinks to high hell!  I heard there’s a feedlot there, and that’s what makes the place reek enough to gag a rodeo clown.  So, we’re moving our show to Boulder.  On top of that, it appears that our concession stands are selling way too many snacks that have entirely too much salt, sugar and fat.  Barbecued ribs, cotton candy and fried crap will give you diabetes, clog your arteries and give you a heart attack.  In short, we’re killing our fans- slowly and painfully.  We’re calling it quits on that.  The Boulder community, with its foodies and organic vegetable suppliers are sure to offer our fans much healthier snacks.  Who doesn’t crave organic kale salads, non-GMO tofu or carrot juice smoothies while watching a cowboy get bucked by a wild bronco?”

It appears the Stampede organizers also want to change the demographics of their audience, “Our fans have for too long been predominantly rural, working-class, conservative and Caucasian- precisely the kind of people that are on the downturn in America today.  We need to be hip and appeal to a more diverse audience; this year, we started out the transition by bringing [African-American country singer] Darius Rucker, but next year, we’re planning on having [rapper] Jay-Z.  Not only that, but seriously, how much money can you make off of broke-ass white people from the boonies of Poo-Dunk, USA?  Don’t those folks blow all their money on cigarettes, cheap beer and meth?  If we’re gonna be true America-loving capitalists, and make some real bucks, we gotta appeal to the folks with the dough: hipster liberal, urban types who think they’re diverse.  What’s the ‘Numero Uno’ place for that here in Colorado?  Boulder, of course, though Fort Collins isn’t too far behind.  Lastly, we want to break the hetero/cis-normative, stigma of the hyper-macho sport of rodeo, and become fully inclusive of the LGBTQ+ community of Northen Colorado.  Again, what’s the epicenter of that in the Centennial State?”

In other news, area restaurants, construction sites and landscaping businesses have suffered record-high absenteeism, with workers calling in sick a day after Mexico’s 2-1 win over South Korea in a World Cup Soccer qualifier.  Liquor stores also report record-high sales of Tecate, Corona and Dos Equis beers as well as tequilas of all kinds.