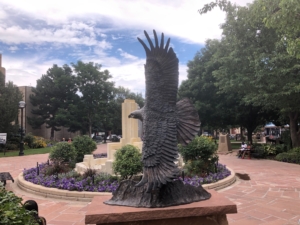 It was a difficult journey for Todd Dieffenbacher, the Boulder sculptor.  It started out well enough, as Todd explained to Focopolitan Tribune reporter Ludwig Schnee, “I fell in love with sculpture when I first saw Michaelangelo’s David on a family trip to Florence.  His muscles were so pronounced, and his endowment was so lifelike; I knew instantly that I wanted to pursue the craft.”  What followed was 15 years of success in the world of high arts and culture for the talented Mr. Dieffenbacher.  It included displays in New York’s Guggenheim and numerous galleries in Boulder.

Even with all the accolades that he accumulated with his art, Deiffenbacher felt something was off kilter in the homonormative world of Boulder art: he was heterosexual.  “I always knew I was straight.  I did like David, but it was actually because I like sculpture, not dudes, but you know how the art world is.  It’s just not a safe place for those of mainstream sexual identification.”  In tears, Dieffenbacher, continued, “All I want is to be accepted as a white, heterosexual, cis-gendered male!  I needed to be true to myself and I couldn’t keep on living this lie.  Nobody could believe that a guy who loved Florentine sculpture could possibly be anything buy gay, and I just played along.”

After years of trying to fit in by conforming to the metro/homo-normative strictures of the artistic community, Dieffenbacher knew he was posing.  “The turning point came when I talked to my therapist. She encouraged me to get in touch with my feminine side. And my feminine side is one of those lesbian, butchy-types, ya know; the kind that could change the treads on a bulldozer. She told me to ‘Man up, you soy boy!’ So I have. We’re just gonna have to see how the community reacts to my coming out.”

We at the Focopolitan Tribune salute the courage of heterosexual cisgendered people who have struggled with their sexuality in the face of an oppressive, closed-minded, bigoted, uninclusive world that practices and praises uniformity.

For yet another Holiday shopping season, FoCo’s oldest mall has paradoxically provided
In an announcement today, the City of Fort Collins Party Authority (CFCPA)
Northern Colorado residents are some of the most worldly in America.  We
Every February, America celebrates African-American History Month.  This year is no exception.
This is the holiday season.  This is the season of kin group
Go to Top