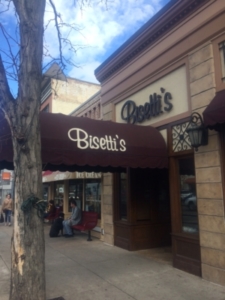 This past January 31st, Focopolitan mourners carried a mock coffin from Bisetti’s restaurant all the way to Grandview Cemetery, FoCo’s poshest, most exclusive burial ground, in a requiem for that beloved staple of Fort Collins dining. Marching to Frederic Chopin’s Marche Funebre, and under the lugubrious light of a super blue blood moon, the people shared their memories of the times they had at the four decades-long institution. After hearing about the: many dates, wedding receptions, business deals, bar/bat/bax (for the transgender Jew) mitzvahs and meals that folks had there, people invariably asked, “So what’s gonna go in there now?”

It wasn’t a half hour after the doors of our beloved Bisetti’s closed for good, that a sign went up announcing the soon-to-be open new establishment: a local, biker bar. Focopolitan Tribune reporter Ludwig Schnee happened to be passing by when some of the new tenant-cum-patrons of the space were unloading wrenches, power tools, oil pans, bottles of booze, and various-sized boxes that read “Harley Davidson” on them. One of the leather-bound, burly men carrying parts into the closed Bisetti’s took the time to speak with Schnee. “We’re coming in here in order to have a place to gather at, booze it up, raise hell and change the oil of our Harleys.”

The Focopolitan Tribune crew attempted contact with various concerned institutions from neighboring stores to security services to umbrella business organizations, inquiring about the opening of the new establishment and got a surprising degree of positive feedback. In an email, one member of the Business Organization of Old Town (BOOT) stated, “People talk so much about diversity here, but nobody ever does much, so we would like to invite the new owners to our next luncheon. We would love to have one of them on our board of directors. That would sure bring some diversity to our community.” While some were concerned that the biker gang is part of the Hell’s Angels, the group is actually a local phenomenon calling itself Phuck the Poudre. Why they opted for such a name is unclear, but we hope to inform our readers of that sometime in the near future.

The Trib crew were unable to contact Fort Collins Police Services officially, but a passing security-for-hire officer spoke anonymously, “Hell, yeah! Finally we can get some action here other than canning bums and slamming drunk college students onto the pavement! These guys are actually gonna keep me, the police, the jail and the courts in business!” College students themselves seemed enthused. A CSU sociology major, Colleen Middleton, had this to say, “It’s so exciting; can’t wait to see the place up and running!” A small squeal ensured.

Tim Ashbury, the owner of the bar, and its bartender, seemed pleased with himself. As he stood in front of the entrance, he smiled. “Now this is a proper place for a bar; right in the fuck sakes of things! I can’t believe no one’s tried this before me.” As he stared up at the building, he had this aside to Schnee. “Gonna have to white-trash up this awning though.