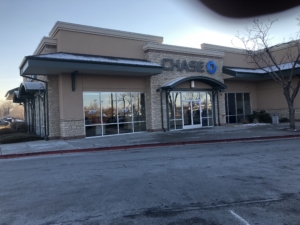 Last Wednesday around 2:15 PM, Fort Collins Police Services responded to a reported robbery at the Chase Bank on 1275 East Magnolia St.  What ensued was a police search that must have made the lousy schlub of a bank robber feel like DB Cooper himself!  The search, which involved dozens of uniformed officers, police detectives and even an observation drone gave our dear friends in blue something to do for a few hours between two prolonged periods of taking calls, writing tickets, paperwork and otherwise dull cop shit.  It might be worth mentioning in passing that their presence as well as their flashing blue lights did little to discourage lookie-Lous.

In any event, we reached out to an FCPS officer involved in the case who requested not to be named.  He told Focopolitan Tribune reporter Ludwig Schnee, “Ooooh yeeeeaaaaaahhh!!!  A break from busting bums out by the homeless shelter!  Woohoo!  What, and we even got the cobwebs off our tactical gear?  And we’re using a drone?  This is what I signed up to be a cop for!  Whooopeeee!”

While the police is officially mum about the case, as it’s ongoing, we were able to speak to a detective who also requested anonymity.  “We absolutely canvassed the strip mall, which contains a variety of retail outlets in addition to the bank.”  The detective went on to elaborate what he discovered at these various businesses: “Q-Doba has LOTS of burritos.  Dairy Queen sells ice cream, Game Stop is apparently a geek hangout.  Papa Murphy’s sells pizza and the UPS store has lots of mailing packages.”  Your police force is sure astute in its observations.

Apparently, the suspect was masked, but it has still not been conclusively disclosed whether he was armed or not.  Nobody was injured in the incident.  Given the schlubby way that the crime was committed, it would be no surprise to us at the Focopolitan Tribune if the bank robber was planning a shopping trip to Wal-Mart, just two parking lots and a street away from the scene of the crime.  It’s our opinion the he bought the balaclava there, anyway.  Given this guy’s MO, it is our opinion that he’s a top candidate for a “people of War-Mart” meme that you see social media when you’re supposed to be working.  We therefor would like to conclude that given that he’s not exactly Ocean’s Eleven material, this dude’s probably gonna get caught.

All suspects are innocent until they are proven guilty in a court of law.